What is headless eCommerce The world of development and digital can sometimes throw terms and phrases at you that instantly pique your interest. Headless eCommerce, or headless in general, is one of those concepts.

One would presume that without a head, something is useless and unthinking. But as you will see, headless eCommerce is a clever new approach to eCommerce that wants to get the most out of their store. But it’s not for everyone.

Sounds terrible, what is headless eCommerce?

To consider what headless eCommerce is we need to consider how the eCommerce solution is put together.

However with headless eCommerce we ‘cut the head off’, and keep the body. Or more specifically, we keep the back-end and disregard the components of the solution that deal with the front-end management of the website.

We still are using Shopify and Magento to manage the capture or orders, integrations, etc. But instead of using those systems for the front end, we use a bespoke system to present things the way we want. 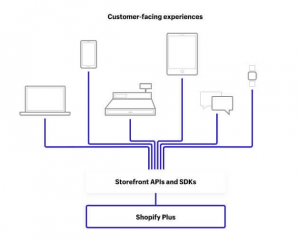 What are the benefits?

Headless eCommerce can overcome a couple of hurdles when it comes to the eCommerce platform. With a traditional eCommerce configuration you can be largely bound to what is provided from the service providers.

What are the draw backs?

While headless can sound great, there is a reason that solutions like Shopify exist. They save time and give you a good practice solution to common problems.

If you are going to go headless, you will need to invest in building the front-end presentation layer from scratch. So the initial time to market may be a little slower. But once established, the change velocity could be increased, and you ability to change and modify untethered..

The implementation of headless eCommerce and CMS’s are becoming quite common.

In Australia Koala Mattresses is an advocate for headless eCommerce:

“Most companies would kill for our velocity. The speed with which our development team is able to deliver solutions from ideation to production is triple what I’ve seen anywhere else.”

Why you wouldn’t use headless eCommerce?

Headless eCommerce is not going to be practical unless you already have a relatively sophisticated eCommerce practice already.

Headless is not going to be suitable if:

For many, the additional cost doesn’t make up for the increased flexibility and ability.

When we recommend headless eCommerce

Headless eCommerce is definitely not for everyone. But we recommend headless for: